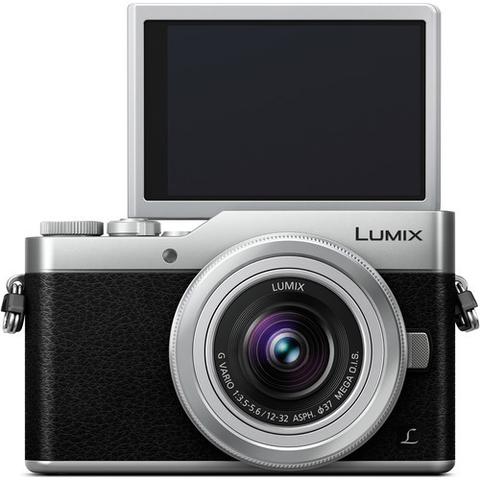 A pocketable powerhouse of a camera, the silver Lumix GF9 Micro Four Thirds Mirrorless Camera from Panasonic manages to squeeze an outstanding level of performance into a super compact body with a 3.0" 180° tilting touchscreen that is perfect for selfies. This camera comes with a retractable Lumix G 12-32mm f/3.5-5.6 ASPH. lens that provides a versatile 24-64mm equivalent focal range and takes up little space when not in use. Beyond this, the GF9 is a member of the Micro Four Thirds system, allowing it to work with a wide range of interchangeable lenses. Also, it features a 16MP Live MOS image sensor that can create sharp images at sensitivities up to ISO 25600 and record UHD 4K video at 24/30 fps.

With a 49-point AF system that uses Depth-from-Defocus technology to provide sharp images, the GF9 does not dissapoint. Also, multiple 4K PHOTO modes are available, which take a burst of images from which you can then select the best moment to save. Also, it can capture up to 10 full-size images each second with AF-S and work at 6 fps with AF-C. Furthermore, built-in Wi-Fi connectivity makes it easy to control the camera and transfer files to a mobile device.

Improving usability is the inclusion of a built-in flash along with a variety of settings and functions to make taking pictures simpler. This includes 22 creative filters that will enhance your images and a couple of auto shutter settings to make taking selfies and group photos easy. Additionally, it features a microSD card slot that is UHS-1 rated.

16MP Live MOS Sensor
Using a 16MP Live MOS sensor, the GF9 is capable of capturing clear, high-resolution stills as well as UHD 4K video. The sensor's design omits an optical low-pass filter in order to achieve a high degree of sharpness and resolution, and its design also affords a sensitivity range from ISO 200-25600 to suit working in a variety of lighting conditions. Additionally, fast shooting performance is also afforded, with the ability to shoot at up to 30 fps at 8MP using the 4K Photo Modes, 10 fps with AF-S and an electronic shutter, or 5.8 fps with a mechanical shutter.

UHD 4K Video Recording
In addition to the versatile still shooting modes, the GF9 also supports recording UHD 4K (3840 x 2160) video with either 30p or 24p frames rates at 100 Mbps in the MP4 format. Full HD 1080p/60 is also supported, in both MP4 and AVCHD formats, as well as HD and SD resolutions. Users will be able to record UHD 4K footage for up to 5 minutes at a time and Full HD 60p video for up to 20 minutes. A built-in stereo microphone can be used during recordings, and features an integrated wind-cut filter for cleaner audio quality when shooting outdoors. Also, a micro-HDMI port permits the use of external monitors and recorders at up to 4K resolution.

Depth-From-Defocus AF Technology
For accelerated autofocus performance, DFD (Depth-From-Defocus) technology is employed to quickly calculate the distance to subjects and adjust the focusing position in order to suit working with continuous shooting rates up to 6 fps with continuous AF. This contrast-detection type focus method benefits both still and video recording modes, as well as subject tracking applications where subject color, size, and motion vectors are used to intelligently lock-onto the moving subjects and ensure precise focus. Additionally, supporting working in low-light conditions, a Starlight AF feature enables accurate AF performance down to -4 EV.

Benefitting manual focus operation, focus peaking is available that highlights bright edges of contrast with a colored outline for quickly recognizing your focus point, as well as Touch MF Assist for touch-to-focus operation.

Lumix G Vario 12-32mm f/3.5-5.6 ASPH. Lens
A versatile standard zoom, the Lumix G Vario 12-32mm f/3.5-5.6 ASPH. is a 24-64mm equivalent wide-to-short tele featuring a sleek design to pair well with the compact camera body. Three aspherical elements and one extra-low dispersion element are incorporated within the lens design to reduce both spherical and chromatic aberrations in order to increase image clarity and sharpness. Complementing the optical design is an internal focusing system and stepping motor that pairs with the camera's contrast-detection AF for quick, accurate focusing performance.