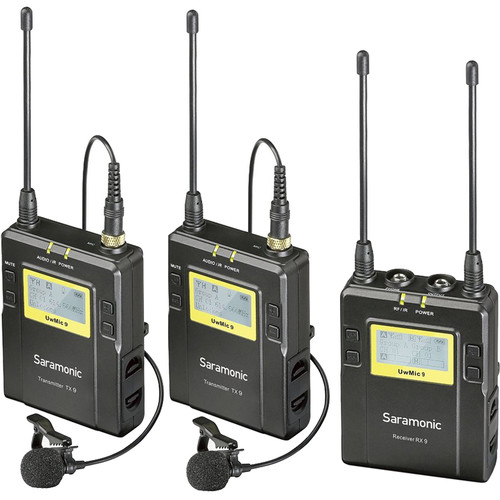 The system's RX9 camera-mountable receiver features a wide-switching RF bandwidth and an easy-to-read LCD display. It is built with infrared synchronization between transmitter and receiver, an auto-scan function, and can search for an available transmission frequency. The headphone jack provides real-time monitoring with headphones, which is useful for cameras that lack a monitor output.

The two compact transmitters employ a crystal-controlled PLL synthesizer and are equipped with a muting function. Their RF power output can be switched between high, middle, and low settings. In addition, each transmitter is built with a 1/8" type mic input. Also, included with this system are two lavalier microphones, a shoe-mount adapter, a single 1/8" to XLR output cable, and a single 1/8 to 1/8" output cable.