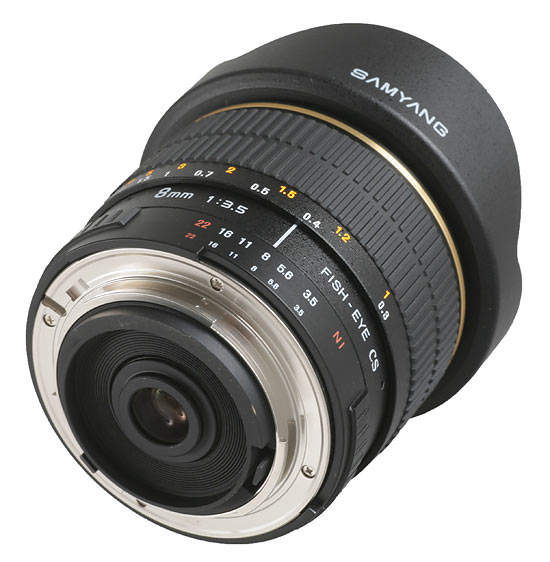 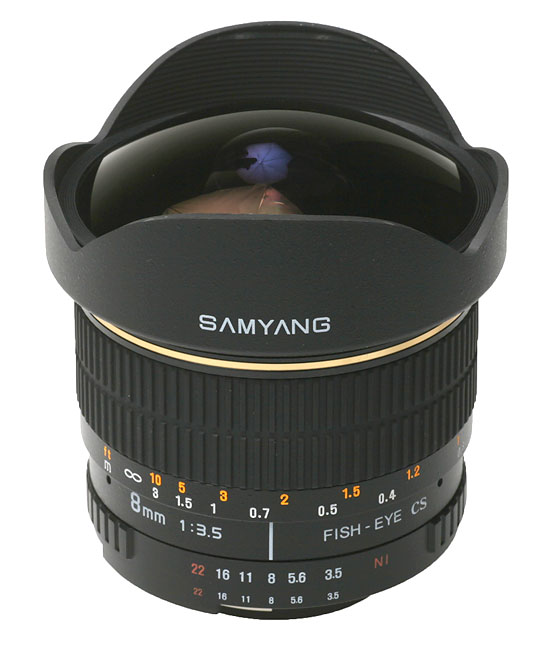 Samyang 8mm f/3.5 Aspherical IF MC Fish-eye is the highest quality wide angle lens. The lens is produced for cameras with the APS-C sensor. The construction of the lens is based on 10 elements placed in 7 optical groups. Thanks to using the aspherical hybrid lens and the newest generation multilayer anti – reflection coutings,  the optical parameters are maintained on the highest possible level. The aperture consists of six diaphragms and can be close to f/22.  A built-in lens hood was also used here. The lens offers a 180 degrees field of view for APS-C cameras. The 8mm Samyang is a diagonal lens of the „fish-eye" type. Thanks to this, the perceived world changes totally. All one has to do is to connect it to the body of the camera to discover a different reality. The traces of the perspective become another centem of the artistic expression. Now only your imagination can limit you. Similary to his older brother, the portrait lens – Samyang 85mm, fish-eye was very well evaluated by portals publishing independent tests and opinions. Below several interesting fragments: The test in LENSTIP.com „The fastening of the 8mm and visual field of 180 degrees whichwas used in Samyang suggests the use of stereographical imaging. This is interesting news. Such an imaging in photography gives the most pleasant effects to our eyes, because in the corners of the visual field the shapes are kept best of all imagings and the straight line curves are moderate as for ." The low price of Samyang cannot be perceived in the quality of execution. The lens begins with a metallic bayonet, behind which we will find the ring to change the aperture. It is not especially wide, but allows comfortable work.” The view emerging is without the doubt very nice to our eye. On the maximum relative opening almost 34 lpmm is reached, what means a image of a full usefullness. The brighter Sigma 2,8/10 was eden sharper (on the less packed Canon 20D matrix it gave the result of over 36 lpmm), however, we cannot forget that it is almost 3 times more expensive than Samyang. A small closing causes that the images from Samyang are much sharper. The differences between Sigma and Samyang are minimal. What we can see on the edge of the frame is astonishing. Our experience with object lenses is not big, but Samyang makes a really great impression.” “We wre very curious of this test. Not so long ago, we were positively surprised by Samyang f/1.4 which in the areas of maximum relative opening could were sometimes much better than renowned producers. Now Samyang 8 mm f/3.5 is on the market which uses a very difficult in execution stereographical imaging and it uses it well! Most of all we get a high quality images, both in the center of the image and on the edges. The test in swiatobrazu.pl ” Samyang 8 mm f/3.5 Fisheye is an lens which positively surprises with the image quality from the lens stop F5.6. The most optimum, if we take into consideration the amount of details recorded by the camera, are diaphragm values in the range from f/8.0 to f/11.” “A similar situation to the evaluation of image sharpness is with the aberration control, where Samyang positively surprises - again. One does not need to look for the traces of aberration in the center of the image, where it is clear and free of purple discolourations. Only near the edges of the image one can find it, but even with the lens stop fully opened, the intensity of discolouration is small" “Samyang 8 mm f/3.5 Fisheye is an object lens belonging to a small family of object lenses in which the way of imaging of our sorroundings is different than the one we are already used to. The characteristic form which the sorrounding take while photographing comes from distortion, which in fish eye is not corrected. During our test Samyang 8mm f/3.5 fish Ele presented itself as a good construction free to compete with other producers like Sigma or Nikon. The optical parameters of the object lens cause that with a small amount of money we can receive a very good optics which will supplement our set of glasses and allow receiving interesting effects on our photos." The test on Canon-board forum „Firstly – the construction of the glass – what can I say, it’s a TANK! Small, yet very heavy. The fish eye by Canon 15mm is nothing compared to this one! This glass made by Samyang is a strong and heavy metallic construction." "Adjusting the sharpness – it is totally different here than in the previous model 85 1.4. Adjusting the sharpness does not require thorough precision. One can easily adjust it „by feeling it” – using the length scale on the object lens. The depth of focus is so big that it is really hard not to make a sharp photo. The loss of AF is not an obstacle here. It’s a huge plus.” „I will say just this – the glass on the f=3.5 lens stop opened vignettes very little. The sharpness in my opinion is acceptable from the full opening, and after closing on 5.6 it is very nice both in the center and the edges.”

Somewhere along learning and experimenting with photography that I stumbled on the idea of trying out fisheye. So far, I liked everything about it though the images appeared a little soft arising from my inexperience.