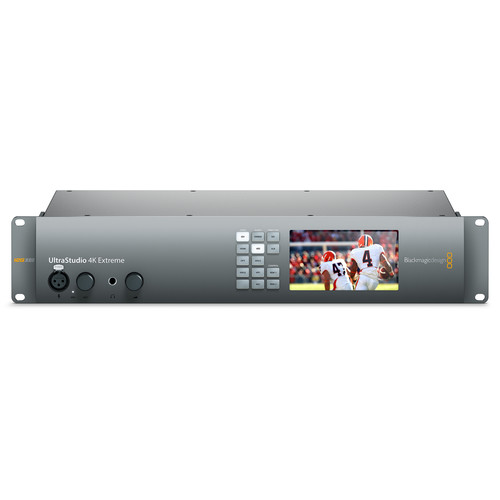 A faster upgrade to its predecessor, the UltraStudio 4K Extreme, Blackmagic Design UltraStudio 4K Extreme 3 is built with a Thunderbolt 3 interface, which features a 40 Gbps transfer rate that better supports 4K ingest when working in RGB or stereoscopic formats. The super high speed of Thunderbolt 3 is fast enough for the highest bit depth HDR uncompressed RGB 4K and stereoscopic formats, such as those used for high end feature films. Like the previous model, UltraStudio 4K Extreme 3 still offers PCIe, 12G-SDI, HDMI 2.0, and analog connections, 4:4:4 sampling, and real-time H.265 encoding. It supports 4K DCI and UHD footage in up to 60 fps.

UltraStudio 4K Extreme 3 has a 2 RU rackmountable form factor with the primary connectivity on the back panel. For local monitoring, it offers an LCD preview screen and basic controls on the front panel.

12G-SDI
The fast speed of 12G-SDI means UltraStudio 4K Extreme 3 can support both capture and playback of Ultra HD and 4K 60p over a single BNC cable. Because the 12G-SDI connections are multi-rate, you can still connect to all your existing equipment. UltraStudio 4K Extreme 3 even supports dual link 12G-SDI so you can do stereoscopic and simultaneous fill and key all in real time.

Style and Durability
The elegant front panel has an integrated color LCD and easy-access video and audio input buttons.